So Unfortunatly, I was such in a rush to get ready and get to my father-in-law's birthday party that I completely forgot to take a picture of my latest creation.  So this cake was made with guava.  My father in law loves guava.  When I dating my boyfriend (hubby now), I recall my father in law eating soda crackers with cheese and guava paste.  This is very cuban thing to do...lol.  I have never eaten it like this but I have had cuban guayaba pastelitos.  They are soooo good!!! If you're ever in Miami, FL, go to the nearest Vickey Bakery and get one. They sell one with cheese too!

Well I used the following recipe from Alohaworld.com.  I didn't do the glaze because at first was going to cover the cake with fondant but then decided on just coating it with cream cheese frosting.  I also mixed the forsting with some guava marmelade for for the filling.  It was really good.  I just invented some stuff with this cake like the juice it calls for, I used Guava Nectar.  Not sure if this changed much but thought I mention it in case you wanted to try it.    Except for the actual cake recipe, I invented a few things that I thought would taste good and did!  My in laws and sister in law and her family loved it.  The cake was super moist too.

I also cut out some fondant lettering for his name.  Says Happy Birthday in spanish and cut out some stars, tried to make it look cute. :) I tried to keep it simple. 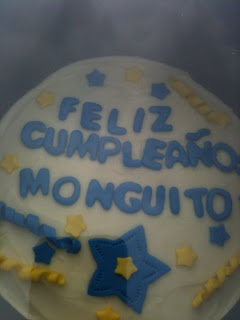 I am trying to do more cakes with fondant.  I love baking and I like that bakery-rustic look in the stuff I make-not sure if you know what I mean-so using fondant is not my forte.  I want to start using it more so I can get more practice.  Anyways, the cake was a hit and I hope you try it!  Tell me what you think if you make it?
Posted by Carolyn at 10:22 PM 2 comments: 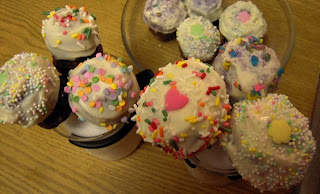 So I decided to make the famous Cupcake Pops from Bakerella.com.  I made them during the Easter weekend.  They were super easy to make but did take some time. I think my were much thicker and bigger than Bakerella's.  For next time I will make them smaller.  LOL  I used Wilton White and Chocolate Bark and homemade Cream Cheese frosting from when I made the Carrot cake.  See Previous Blog.  I made three Carrot cakes for Easter so it worked out!
I used various different sprinkles to coincide for the Easter Holiday!  I love Sprinkles. <3 Don't You?  :)
They made great treats for the kiddies and adults love them as well.  Tell me what you think?  Have you tried them yet? 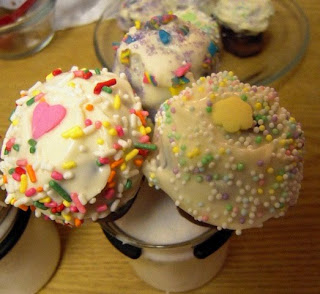 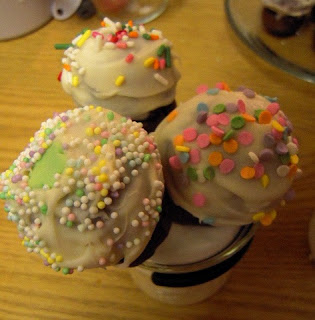 Carolyn
Miami Lakes, Florida, United States
Hello!!!! Welcome Everyone to my blog! I'll be discussing everything from my life, mixed in with my baking and cooking adventures. I hope you enjoy it and please don't be shy...comment and feel free to ask me anything!!!!! BTW, My dream is to one day to go to Culinary School or learn MORE and MORE. I Hope to one day open a bakery or get one of those Ice Creme Trucks and turn it into a Sweets and Treats Mobile. I love baking cookies, cakes, trying new recipes, cooking and just making people smile with my goodies! :0)